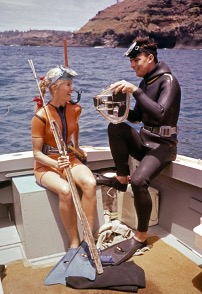 Valerie Taylor, marine expert and Australian icon, is synonymous with the ocean, and along with her late husband Ron the couple are responsible for trail blazing the shark conservation conversation in Australia. Originally a spear fisher with Ron, Valerie changed their lives from killing fish to creating awareness for conservation and the documentation of the ocean.

Close to their hometown, fishermen would kill sealions for crab bait, decimating their population. This sparked a epiphany within the couple and they went on with the assistance of the government to ban spear fishing with diving apparatus, protect grey nurse sharks, great whites and great swaths of the ocean declared as marine protected areas (Ribbon Reef and Cormorant Pass). There was plenty of opposition against their ideals, especially spear fishermen, however, through thorough research and stunning imagery the couple succeeded in their goals, especially when the opposition, including notorious shark hunters such as Vic Hislop were compulsive liars to promote their own desires.

While there are multiple white shark populations across the globe, most notably in Australia, South Africa and off the coast of Mexico, the sharks off Australian waters have the most aggressive reputation. Despite this, the Taylors have swum with the giants outside of the protective cages, allowing audiences to dismiss the notion of terror that was assigned with the great white.

Valerie and Ron were approached by many media houses and production companies due to their expertise with marine fauna. One of which was the famed Hollywood producer Steven Spielberg. Mr Spielberg asked the couple to film the in-water scenes of great whites for the cult classic.

The couple continued to work on feature films and documentaries internationally including titles such as Blue Eater and The Blue Lagoon, garnering multiple awards and bringing delight and passion to audiences not just in Australia but across the globe.  In the 1980s and 90s, Ron and Valerie continued to research shark deterrents and worked hard to promote marine conservation. In 1992 Ron and Valerie Taylor were awarded the Australian Geographic Society’s Adventure of the Year Award and in 2003 were made Members of the Order of Australia for their conservation efforts.

While Ron passed 7 years ago, Valerie is still an avid campaigner for ocean conservation including for the controversial government shark control program (shark nets) and continues to write books, consult on movies such as Blue and other documentaries. Most importantly, even at the age of 84, Valerie still dives.

READ MORE OF OUR BLOG
EXPLORE OUR WHALE WATCHING TOURS
The Legacy of Valerie Taylor – An Australian icon2021-01-122021-01-12https://seathegoldcoast.com.au/wp-content/uploads/2019/01/logo-80-sea-the-gold-coast-tours.pngSEA The Gold Coasthttps://seathegoldcoast.com.au/wp-content/uploads/2021/01/bigstock-great-white-shark-carcharodon-392324231.jpg200px200px
Book Now